Closed Die Forging is a forging process in which dies (called tooling) that contain a precut profile of the desired part move towards each other and covers the workpiece in whole or in part. The heated raw material, which is approximately the shape or size of the final forged part, is placed in the bottom die. The shape of the forging is incorporated in the top or bottom die as a negative image. Coming from above, the impact of the top die on the raw material forms it into the required forged form. Parts from a few ounces to 60,000 lbs. can be made using this process. Some of the smaller parts are actually forged cold.

Commonly referred to as closed-die forging, impression-die forging of steel, aluminum, titanium and other alloys can produce an almost limitless variety of 3-D shapes that range in weight from mere ounces up to more than 25 tons. Impression-die forgings are routinely produced on hydraulic presses, mechanical presses and hammers, with capacities up to 50,000 tons, 20,000 tons and 50,000 lbs. respectively.

As the name implies, two or more dies containing impressions of the part shape are brought together as forging stock undergoes plastic deformation. Because metal flow is restricted by the die contours, this process can yield more complex shapes and closer tolerances than open-die forging processes. Additional flexibility in forming both symmetrical and non- symmetrical shapes comes from various pre-forming operations (sometimes bending) prior to forging in finisher dies.

Part geometry's range from some of the easiest to forge simple spherical shapes, block-like rectangular solids, and disc-like configurations to the most intricate components with thin and long sections that incorporate thin webs and relatively high vertical projections like ribs and bosses. Although many parts are generally symmetrical, others incorporate all sorts of design elements (flanges, protrusions, holes, cavities, pockets, etc.) that combine to make the forging very non-symmetrical. In addition, parts can be bent or curved in one or several planes, whether they are basically longitudinal, equi-dimensional or flat.

Most engineering metals and alloys can be forged via conventional impression-die processes, among them: carbon and alloy steels, tool steels, and stainless, aluminum and copper alloys, and certain titanium alloys. Strain-rate and temperature-sensitive materials (magnesium, highly alloyed nickel-based super-alloys, refractory alloys and some titanium alloys) may require more sophisticated forging processes and/or special equipment for forging in impression dies.

In the simplest example of impression die forging, two dies are brought together and the workpiece undergoes plastic deformation until its enlarged sides touch the side walls of the die. Then, a small amount of material begins to flow outside the die impression forming flash that is gradually thinned. The flash cools rapidly and presents increased resistance to deformation and helps build up pressure inside the bulk of the workpiece that aids material flow into unfilled impressions. 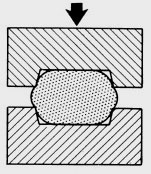 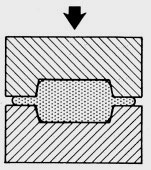 Fundamentally, impression die forgings produced on horizontal forging machines (upsetters) are similar to those produced by hammers or presses. Each is the result of forcing metal into cavities in dies which separate at parting lines. 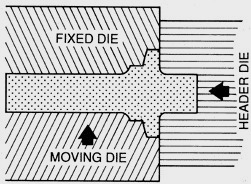 The impression in the ram-operated "heading tool" is the equivalent of a hammer or press top die. The "grip dies" contain the impressions corresponding to the hammer or press bottom die. Grip dies consist of a stationary die and a moving die which, when closed, act to grip the stock and hold it in position for forging. After each workstroke of the machine, these dies permit the transfer of stock from one cavity to another in the multiple-impression dies.